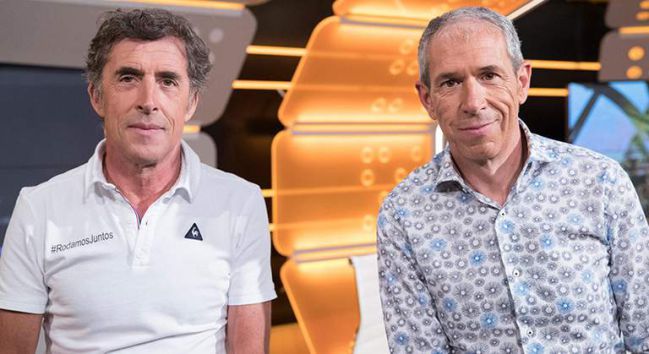 – No. There is always something to do. Besides, you have to appreciate what you have. Cycling has caused me to spend up to 150 days away from home at times. That’s why it’s not hard for me to be at home. My daughters are older now and I have more time for myself.

– I don’t know if that’s the right word. I really don’t. It’s true that cyclists travel, suffer and work hard. But there are also other professions in which people suffer and work hard and the difference is that they don’t like what they do. However, the cyclist likes it, he is here because he likes what he does.

– He told me that it was easier to tell how a cyclist falls or how he stops for an ice cream. But that’s the cycling of yesteryear. Now it’s the one of the watts and the emotion, which we have left, is in the error, in thinking that things can happen.

Grand cross of the order of sporting merit

Read also: RTVE responds to accusations of sexism in Masterchef and defends the staging of Blas Cantó in Eurovision From Miren Amiano to Kepa Jamecho: jokes to the narrators of the Tour on TVE Some of the naughtiest Internet users wanted to play on the narrators and made up names that formed spicy puns. The first of these was Miren Amiano, a name uttered by Perico Delgado before reading a question about Pello Bilbao’s chances of doing well in the general classification of the race.

Winners of the tour de france

Carlos de Andrés is convinced that it will be “a very busy race”, since “there are many beautiful stages in which anything can happen, and with very exciting finishes”, although the most important thing is “that people have a good time watching the race with us”.

The Sports area of RTVE.es will once again be involved in La Vuelta.  Felipe Fernández, special envoy to the cycling round, will be in charge of reports, interviews, chronicles and many more exclusive contents for the web during the 21 days of the race.

Although it has been a long time coming, the Tour de France 2020 will depart from Nice on August 29th and head for Paris. The great cycling event can be followed live on La 1, Teledeporte, RNE and RTVE.es, narrated by the veteran pair of commentators formed by Carlos de Andrés and Pedro Delgado.

In addition to following the race, there will be exclusive content in the videos ‘El Tour en un minuto’ (a daily summary of around 60 seconds) and ‘El Zoom’ (a video that will include, when the occasion deserves it, what may go unnoticed in the transmissions).

In the Tour special you will find the profiles of the stages, the participating riders or the page where you can follow the live race with the usual multi-camera (motorcycles, helicopters, etc.).